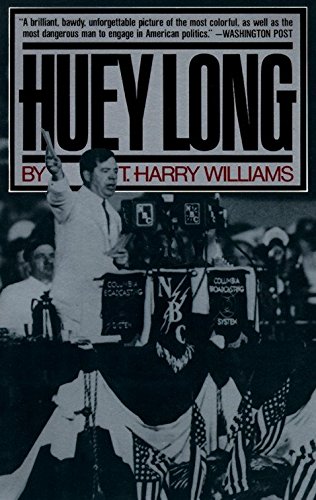 Growing up in Louisiana, Huey cast a long shadow over my state's history. As a kindergartener in the early 1980s, I remember tagging along with my brother's fifth grade class on a tour of the state capitol building and sticking my finger in a bullet hole in the wall where Huey (and his assassin) were killed.

In the Pelican State, political corruption is priced into the system, so much so that one memorable gubernatorial race featured bumper stickers that read Vote For the Crook, It's Important. I picked up this book to understand two things better: the political history that formed the state of my youth and the populist roots and the rampant populism of our current times.

Williams chronicles Huey's rise from humble Winn Parish roots to become Railroad Commissioner, Governor, and United States Senator in incredible detail that borders on tedium. I was fascinated by Long's fight against Standard Oil, the political maneuvering behind the creation of Barksdale AFB, and his fanatic support of LSU and its band. Long's political creativity to deliver promises of free textbooks, bridges, and roads is remarkable. The sheer detail and comprehensive picture of his public life make this book worthy of the Pulitzer Prize which it received fifty years ago.

Yet I found two glaring shortcomings with this book.

First, Williams (perhaps blinded by his own loyalty to LSU), makes plenty of moral and value judgments of figures in the book, yet he seems to explain away every corrupt and underhanded action as Huey being Huey (as many today would say that's Trump being Trump). The amount of power Long, a sitting U.S. Senator, amassed in his own political machine to run two (and sometimes three) branches of the state government (in between trips to Washington to goad FDR) is borderline tyrannical.

Second, it's truly amazing that a tome of nearly one thousand pages can only give a few scant pages to the murder of its central subject in a state capitol building and no ink whatsoever to his lasting legacy, even thirty five years removed from the events.

Countdown to Zero Day: Stuxnet and the Launch of the World's First Digital Weapon

Works Well with Others: An Outsider's Guide to Shaking Hands, Shutting Up, Handling Jerks, and Other Crucial Skills in Business That No One Ever Teaches You