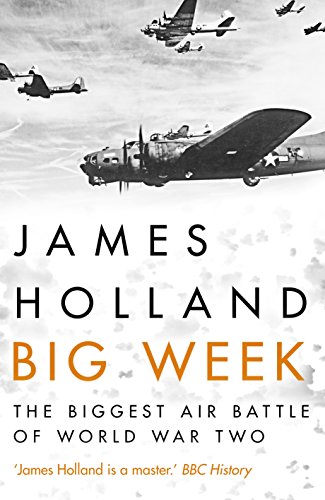 Two years before being nominated for best actor for his role in “It’s a Wonderful Life” (for which the film won an Oscar for technical achievement for simulating falling snow), Major James Stewart was among the thousands of pilots and crew who flew through ice and snow to battle the German Luftwaffe.

Seventy-five years ago, before D-Day and the Allied invasion of France, there was Big Week, an aerial offensive like no other. An all-out effort to cripple the air defenses of the Third Reich in preparation for an upcoming land assault, wave upon wave of American and British heavy bombers and their “little friends” streamed across the skies to tangle with Messerschmitts and their exhausted crews over the cities of German military production.

In artful storytelling, Holland follows airmen from both sides of the conflict through successful operations, bailouts, and crash landings against the backdrop of evolving strategy and tactics. The aircraft loom as large as the men that flew them. Growing up putting together models of the P-51 Mustang, P-47 Thunderbolt, and P-38 Lightning, I found the backstory for these aircraft as compelling as the stories of the airmen themselves.

The Fuzzy and the Techie: Why the Liberal Arts Will Rule the Digital World

The Taking of K-129: How the CIA Used Howard Hughes to Steal a Russian Sub in the Most Daring Covert Operation in History

Things That Matter: Three Decades of Passions, Pastimes and Politics